Can Kenong be used for facial hair removal?

Can Kenong be used for facial hair growth?

In conclusion, Kenon can be used on hair below the nose.

It can be used for hair growth and beard around the mouth.

Q. Can it be used on the face?

A. You can use it.
Eye safety is taken into consideration, but keep it down from your nose.
For men, the hair is generally thick and heavy, so it can be irritating.
We recommend that you cool it down before using it.

Can Kenong be used to remove beards from men?

From the above, Kenon can also be used to remove hair from men's beards.

Men's beards are thick and thick, so it seems that some people say that beard hair removal in Kenong is "painful" at first, but "it doesn't hurt if you start at a weak level and gradually get used to it."

Can Kenong be used in delicate zones such as vio in the pubic area (under hair)?

Kenong has some delicate zones that can be used and some cannot be used, such as v-line, i-line, and o-line.

Kenong can be used for v-line

Kenong can be used for the v line of VIO.

The V line is the easiest zone to remove from your underwear, so you need to take care of it without hair.

In Kenong, it can be used for this V-line hair removal.

Please refer to this article for the popular shapes of the V line.

Kenong cannot be used for i-line

Since the i-line is a place where underwear and napkins tend to get stuffy, germs may grow and cause odors during menstruation.

Therefore, recently, it has become the mainstream to remove hair from the i-line as well.

The instructions clearly state that Kenong cannot be used on mucous membranes.

Kenong cannot be used for o-line

The O line is at the back of the hips. (See the figure below)

Some people do not have hair on the O line, but about half of them do.

Like the i-line, the pubic area is easily stuffy, and the presence of hair makes it easy for germs to grow, so many people lose their hair.

However, Kenong cannot be used for the O line either.

This also hits the mucous membrane and is written not to be used in the instruction manual.

What other convenient ways to use Kenong?

Kenong can be used not only as an epilator, but also as a facial treatment device.

Kenong can be used as a facial device

Kenong can be used as a skin care facial device with a beautiful skin effect by replacing it with a "skin care cartridge for facial beauty".

Kenon's facial skin care is effective for pores, darkening, acne scars, etc., and it also tightens pores, so it also has anti-aging and sagging prevention effects.

If you can feel like a light beauty treatment salon, it is generally OK.

Since Kenon is an optical epilator, it does not have functions such as laser stain removal and mole removal. 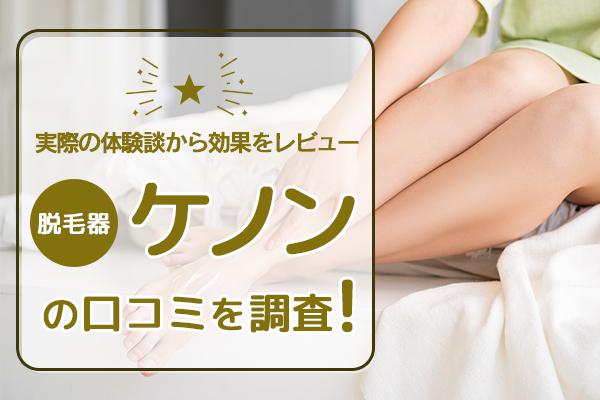 Q. Is it okay to use it for moles?

A. Flash has the property of being absorbed by black color. Do not irradiate areas with dark pigments such as moles and spots as it may cause burns.

It cannot be used for moles and stains. There is no function like laser stain removal or mole removal)

Kenong can also be used by men

Kenong is one of the most popular men's household epilators in terms of sales.

Men can use the V line of chest hair, navel, shin hair, armpits, and beard VIO in Kenong.

Recently, many men are particular about skin care, and the purchase of facial skin care cartridges is also popular.

Kenong can use about 300,000 shots even with the strongest level of irradiation, so you can share it with her and her wife, so it's a great deal.

How often and how do you use Kenong?

Many people don't know how to use Kenong frequently or how often, so let's take a look.

Frequency of use of Kenong

Kenong is used once a week.

As for how to use Kenon, if you repeat irradiating the area you want to remove hair once a week for about 3 months, you will feel that it becomes difficult for hair to grow.

It seems that some early people feel the effect from the 5th time.

Q. How fast should I use it?

A. Please use at intervals of about one week. Everyone has a hair cycle, and once treated, body hair will not be in a suitable state for hair removal until a certain amount of time has passed. Considering the hair period, if you irradiate the same place, leave a week, repeat at least 4 to 5 times, and if you need the 5th or later, please use while watching the condition of your skin.

The usage of Kenong is as follows.

Of course, it is also possible to irradiate one shot at a time instead of firing continuously. (Do not press and hold)

Q1: How many levels are Kenong levels? Which one should I irradiate?

There are 10 levels of Kenong. Irradiate according to individual pain and skin strength.

Kids should start from level 1.

Q2: Can Kenong be used even during pregnancy?

The use of Kenong during pregnancy is not recommended by the manufacturer due to the effects of hormonal balance.

Q3: Can I remove the hair before and after using Kenon?

If you use tweezers or an epilator, Kenon will not be effective.

Kenong is a photo epilator, so it reacts to black pigments and promotes hair removal.

You can expect the same effect as a photo facial.

Q5: How long is Kenong's warranty?

Kenong's warranty period is usually one year, but now it is +2 years and has a three-year warranty.

There are individual differences in the timing of hair loss. For example, people with thick hair, V-lines, beards and other dark areas are very difficult to remove, and some people take more than 4 months. Let's work without rushing.

Kenong is a popular item, so second-hand goods and counterfeit goods are always on the market at flea market sites such as Mercari.

Kenong is applied directly to the skin, so we do not recommend second-hand products due to hygiene issues.

Also, it is unclear how to use the previous owner, so please refrain from purchasing from people without knowing it. It is dangerous.

The following damages have actually occurred.

✅ No warranty because it was similar to China

✅ When I tried to irradiate, the cartridge flew

✅ Could not be used

✅ The cartridge was not replaceable, not the latest version

Be sure to buy Kenong from the official website.