What is VIO in the first place? How is it different from Heidi Nina?

Actually, it seems that there are quite a few people who ask, "What is VIO in the first place?"

"VIO" is a term that is commonly used in hair removal salon commercials and advertisements.

This VIO is a general term for the part of the pubic hair.

Heidi Nina, on the other hand, means removing all of this VIO.

I couldn't ask you anymore, but Heidi Nina has no pubic hair!

It's a matter of taste, but there are many people who leave a little V line and I and O have hair loss.

What are the benefits of removing VIO hair?

On the contrary, it seems that there are the following troubles because VIO is not prepared.

What are the disadvantages of not processing VIO?

Actually, there seems to be such a failure story because I did not process VIO on a daily basis.

Suddenly staying date with my boyfriend, I was pulled away and became estranged as it is

Emergency transportation due to menstrual cramps. Go to the pelvic examination as it is.I wanted to die because I found out that it was sticking out of my pants

The smell may be leaking during menstruation.I was worried about the eyes around me

It seems that troubles occur in unexpected cases ...!

In particular, many men seem to take it for granted that VIO is being processed.

(I think it's hard to point out)

It seems that it is best to keep VIO clean on a daily basis.

What are the benefits of having a beautiful VIO?

Having a VIO in place has the following benefits: 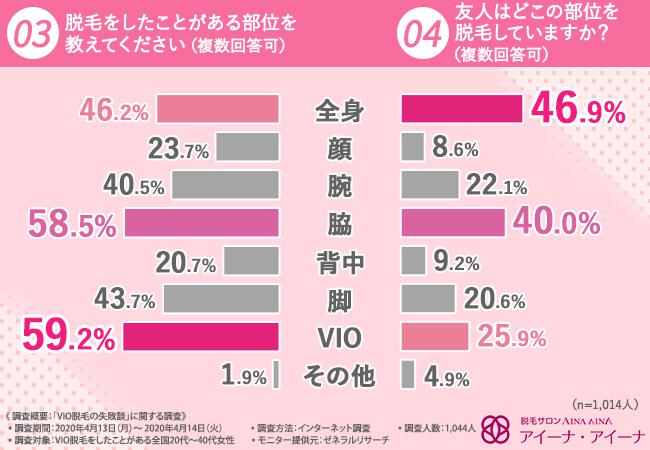 ✅ Don't rush on a sudden date or even in the hospital

✅ You can fashion underwear and swimwear

If you can fashion your underwear, you're an advanced fashioner!

How do you guys have VIO hair removal?

So how do you guys actually do VIO hair removal?

In fact, VIO is a delicate zone, so most people say that they don't want to be seen by others.

Therefore, about 70% of VIOs seem to be doing self-care (self-treatment).

However, there are also such voices.

Even if I shave it, it will tingle the next day.

Short hair pops out of my underwear. It grows quickly ...!

I tried Brazilian wax, but it hurts a lot!Moreover, it grows again

Therefore, if you want to self-process VIO

The most recommended is a household epilator, which gradually stops growing hair with repeated care.

Self-epilation of VIO with a household epilator, does it hurt? safety?

For those who have never done VIO self-hair removal,

Doesn't it hurt if I self-epilate with a household epilator?

Isn't it dangerous to do it yourself?

I think there are many people who are uneasy.

Certainly, it is a delicate part, so it is not a household epilator, but a type that pulls hair from the root

✅ An epilator that pulls out soyes, etc.

It hurts and can cause ingrown hair.

Ingrown hair hurts and looks black and lumpy, which is not beautiful.

However, if you have a household epilator that supports VIO, you should be able to experience the effects of hair removal safely and cleanly.

So how do you safely and cleanly perform VIO self-hair removal?

If you use an electric shaver and a VIO compatible optical epilator, you can do beautiful self-epilation without pain.

The electric shaver is enough for beards. It sells cheaply from 2000 yen at Amazon and mass retailers.

* It is dangerous to pre-treat with a razor.

If you hurt VIO's skin, you can't hit the household epilator, so be careful.

Prev
[2PS Crystal] What are the effects and word of mouth? How is it different from Kenong?
Next
[Kenong are you still lost? ] Four judgment points such as word-of-mouth and effects that you want to know before buying